This day memorializes the birth, enlightenment (nirvana) and passing away (parinirvana) of the Buddha on one day. Traditionally, on Vesak Day, Buddhist temples are decorated with flags and flowers and devotees assemble in temples before dawn. Ceremonial rituals like hoisting the Buddhist flag and bathing of baby Buddha statues are done. Monks chant to the triple gem: the Buddha, the Dharma (his teachings) and the Sangha (his followers). In evening, various candlelit processions are organized in the streets.

The Buddha taught that the only way to pay homage to him was by truly and sincerely following his teachings. So the sole aim of Vesak is to practice love, peace and harmony. On Vesak people generally perform noble deeds like making donations to charity, organizing blood donation camps, distributing gifts and food to poor and needy, releasing the captured animals, eating vegetarian food etc. 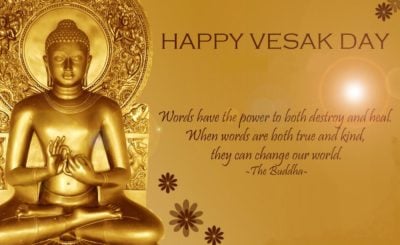