Bodhi Day is the Buddhist holiday that commemorates the day that the historical Buddha, Siddhartha Gautama (Shakyamuni), experienced enlightenment and became known as The Buddha (“awakened one”). According to tradition, Siddhartha had recently forsaken years of extreme ascetic practices and resolved to sit under a peepal tree and simply meditate until he found the root of suffering and how to liberate oneself from it.

Bodhi Day is observed in many mainstream Mahayana traditions including the traditional Zen and Pureland Buddhist schools of China, Korea, Japan, and Vietnam. In Japanese Zen, it is also known as Rohatsu. In Tendai and other Japanese sects, it is called Shaka-Jōdō-e (釈迦成道会) or simply Jōdō-e.

Services and traditions vary amongst Buddhist sects, but all such services commemorate the Buddha’s achievement of Nirvana, and what this means for Buddhism today. Individuals may choose to commemorate the event through additional meditation, study of the Dharma, chanting of Buddhist texts (sutras), or performing kind acts towards other beings. Some Buddhists celebrate with a traditional meal of tea, cake, and readings. 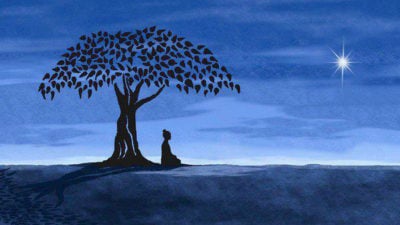